Training a neural network with a large number of images presents several challenges. Even with the latest GPUs, it is not possible to train large networks using a large number of images in a reasonable amount of time using a single GPU. This problem can be somewhat mitigated by using multiple GPUs in a single machine. But there is a limit to the number of GPUs that can be attached to one machine (typically 8 or 16). This tutorial explains how to train large networks with terabytes of data using multiple machines each containing multiple GPUs.

The first step in training with large data is downloading the data and preprocessing it. For this tutorial, we will be using the full ImageNet dataset. Note that, at least 2 TB of disk space is required to download and preprocess this data. It is strongly recommended to use SSD instead of HDD. SSD is much better at dealing with a large number of small image files. After the preprocessing completes and images are packed into recordIO files, HDD should be fine for training.

In this tutorial, we will use an AWS storage instance for data preprocessing. The storage instance i3.4xlarge has 3.8 TB of disk space across two NVMe SSD disks. We will use software RAID to combine them into one disk and mount it at ~/data.

We now have sufficient disk space to download and preprocess the data.

In this tutorial, we will be using the full ImageNet dataset which can be downloaded from http://www.image-net.org/download-images. fall11_whole.tar contains all the images. This file is 1.2 TB in size and could take a long time to download.

After downloading, untar the file.

That should give you a collection of tar files. Each tar file represents a category and contains all images belonging to that category. We can unzip each tar file and copy the images into a folder named after the name of the tar file.

While MXNet can read image files directly, it is recommended to pack the image files into a recordIO file for increased performance. MXNet provides a tool (tools/im2rec.py) to do this. To use this tool, MXNet and OpenCV’s python module needs to be installed in the system.

Set the environment variable MXNET to point to the MXNet installation directory and NAME to the name of the dataset. Here, we assume MXNet is installed at ~/mxnet

To create the recordIO files, we first create a list of images we want in the recordIO files and then use im2rec to pack images in the list into recordIO files. We create this list in train_meta. Training data is around 1TB. We split it into 8 parts, with each part roughly 100 GB in size.

We then resize the images such that the short edge is 480 pixels long and pack the images into recordIO files. Since most of the work is disk I/O, we use multiple (16) threads to get the work done faster.

Once done, we move the rec files into a folder named train.

We do similar preprocessing for the validation set.

We now have all training and validation images in recordIO format in train and val directories respectively. We can now use these .rec files for training.

ResNet has shown its effectiveness on ImageNet competition. Our experiments also reproduced the results reported in the paper. As we increase the number of layers from 18 to 152, we see steady improvement in validation accuracy. Given this is a huge dataset, we will use Resnet with 152 layers.

Due to the huge computational complexity, even the fastest GPU needs more than one day for a single pass of the data. We often need tens of epochs before the training converges to good validation accuracy. While we can use multiple GPUs in a machine, the number of GPUs in a machine is often limited to 8 or 16. For faster training, in this tutorial, we will use multiple machines each containing multiple GPUs to train the model.

We will use 16 machines (P2.16x instances), each containing 16 GPUs (Tesla K80). These machines are interconnected via 20 Gbps ethernet.

If you are setting up your cluster manually, without using AWS CloudFormation, remember to do the following:

After the cluster is setup, login to master and run the following command from ${MXNET}/example/image-classification

launch.py launches the command it is provided in all the machine in the cluster. List of machines in the cluster must be provided to launch.py using the -H switch. Here is description of options used for launch.py.

After training is complete, trained models are available in the directory specified by the --model option. Models are saved in two parts: model-symbol.json for the network definition and model-n.params for the parameters saved after the n’th epoch.

One common concern using large number of machines for training is the scalability. We have benchmarked scalability running several popular networks on clusters with up to 256 GPUs and the speedup is very close to ideal.

This scalability test was run on sixteen P2.16xl instances with 256 GPUs in total. We used AWS deep learning AMI with CUDA 7.5 and CUDNN 5.1 installed.

We fixed the batch size per GPU constant and doubled the number of GPUs for every subsequent test. Synchronized SGD (–kv-store dist_device_sync) was used. The CNNs used are located here.

Number of images processed per second is shown in the following table:

The following figure shows speedup against the number of GPUs used and compares it with ideal speedup. 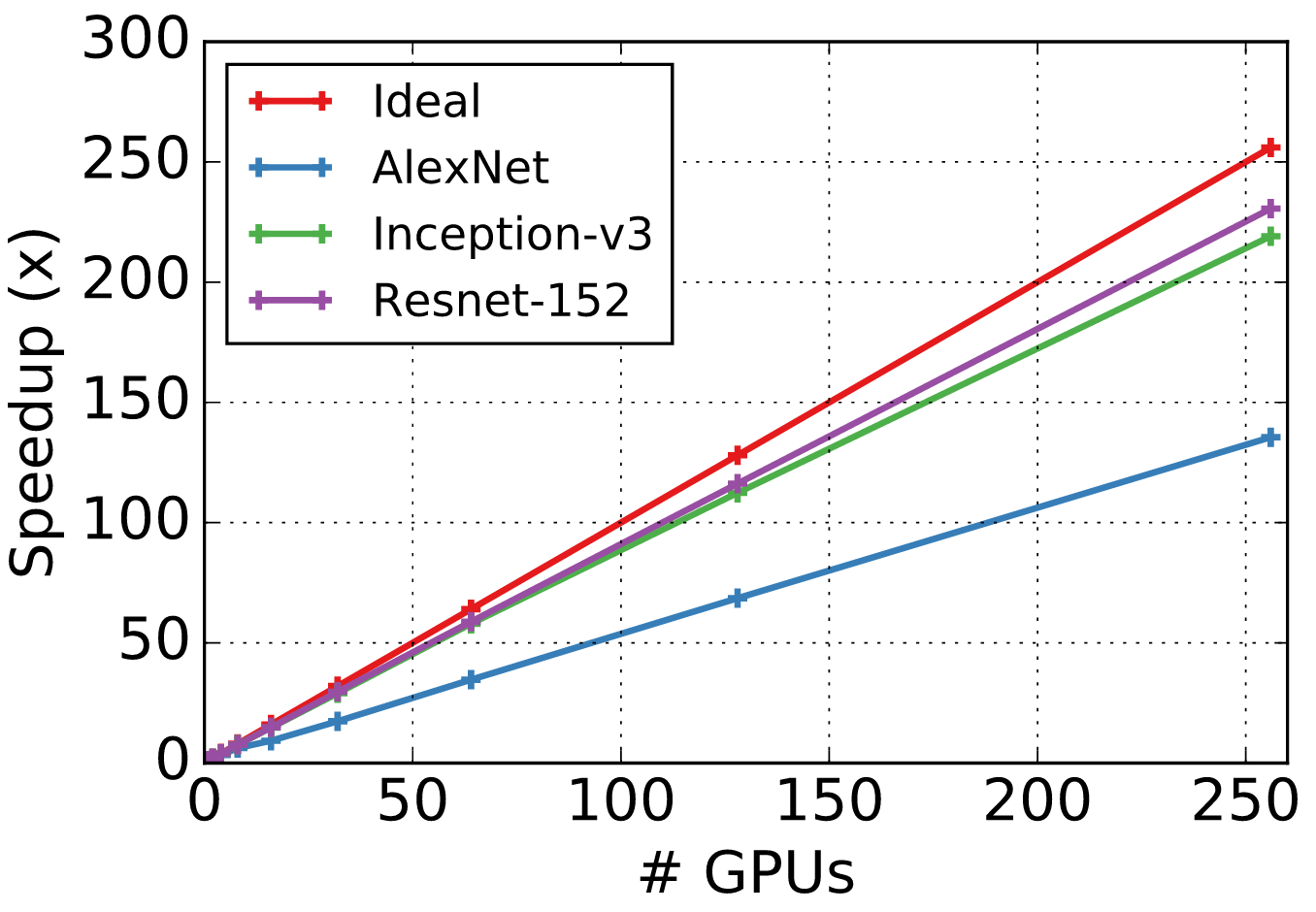 If the batch size is too big, it can exhaust GPU memory. If this happens, you’ll see the error message “cudaMalloc failed: out of memory” or something similar. There are a couple of ways to fix this: