See the “Learning Rate Schedules” tutorial for a more basic overview of learning rates, and an example of how to use them while training your own models.

While trying to push the boundaries of batch size for faster training, Priya Goyal et al. (2017) found that having a smooth linear warm up in the learning rate at the start of training improved the stability of the optimizer and lead to better solutions. It was found that a smooth increases gave improved performance over stepwise increases.

We look at “warm-up” in more detail later in the tutorial, but this could be viewed as a specific case of the “triangular” schedule that was proposed by Leslie N. Smith (2015). Quite simply, the schedule linearly increases then decreases between a lower and upper bound. Originally it was suggested this schedule be used as part of a cyclical schedule but more recently researchers have been using a single cycle.

One adjustment proposed by Jeremy Howard, Sebastian Ruder (2018) was to change the ratio between the increasing and decreasing stages, instead of the 50:50 split. Changing the increasing fraction (inc_fraction!=0.5) leads to a “slanted triangular” schedule. Using inc_fraction<0.5 tends to give better results.

We look an example of a slanted triangular schedule that increases from a learning rate of 1 to 2, and back to 1 over 1000 iterations. Since we set inc_fraction=0.2, 200 iterations are used for the increasing stage, and 800 for the decreasing stage. After this, the schedule stays at the lower bound indefinitely. 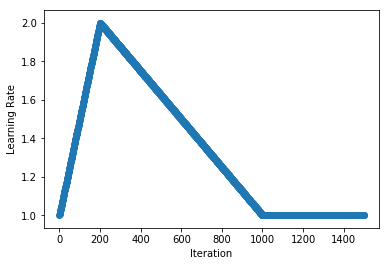 Continuing with the idea that smooth decay profiles give improved performance over stepwise decay, Ilya Loshchilov, Frank Hutter (2016) used “cosine annealing” schedules to good effect. As with triangular schedules, the original idea was that this should be used as part of a cyclical schedule, but we begin by implementing the cosine annealing component before the full Stochastic Gradient Descent with Warm Restarts (SGDR) method later in the tutorial.

We look at an example of a cosine annealing schedule that smoothing decreases from a learning rate of 2 to 1 across 1000 iterations. After this, the schedule stays at the lower bound indefinietly. 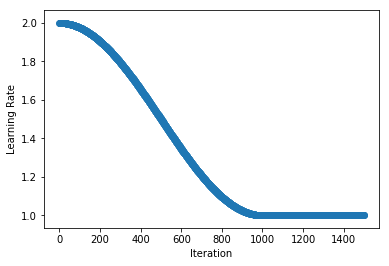 We now take a look some adjustments that can be made to existing schedules. We see how to add linear warm-up and its compliment linear cool-down, before using this to implement the “1-Cycle” schedule used by Leslie N. Smith, Nicholay Topin (2017) for “super-convergence”. We then look at cyclical schedules and implement the original cyclical schedule from Leslie N. Smith (2015) before finishing with a look at “SGDR: Stochastic Gradient Descent with Warm Restarts” by Ilya Loshchilov, Frank Hutter (2016).

Unlike the schedules above and those implemented in mx.lr_scheduler, these classes are designed to modify existing schedules so they take the argument schedule (for initialized schedules) or schedule_class when being initialized.

Using the idea of linear warm-up of the learning rate proposed in “Accurate, Large Minibatch SGD: Training ImageNet in 1 Hour” by Priya Goyal et al. (2017), we implement a wrapper class that adds warm-up to an existing schedule. Going from start_lr to the initial learning rate of the schedule over length iterations, this adjustment is useful when training with large batch sizes.

As an example, we add a linear warm-up of the learning rate (from 0 to 1 over 250 iterations) to a stepwise decay schedule. We first create the MultiFactorScheduler (and set the base_lr) and then pass it to LinearWarmUp to add the warm-up at the start. We can use LinearWarmUp with any other schedule including CosineAnnealingSchedule. 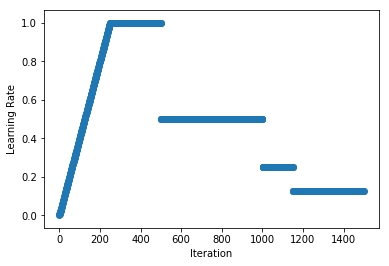 Similarly, we could add a linear cool-down period to our schedule and this is used in the “1-Cycle” schedule proposed by Leslie N. Smith, Nicholay Topin (2017) to train neural networks very quickly in certain circumstances (coined “super-convergence”). We reduce the learning rate from its value at start_idx of schedule to finish_lr over a period of length, and then maintain finish_lr thereafter. 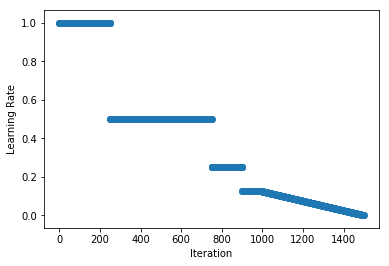 So we can implement the “1-Cycle” schedule proposed by Leslie N. Smith, Nicholay Topin (2017) we use a single and symmetric cycle of the triangular schedule above (i.e. inc_fraction=0.5), followed by a cool-down period of cooldown_length iterations. 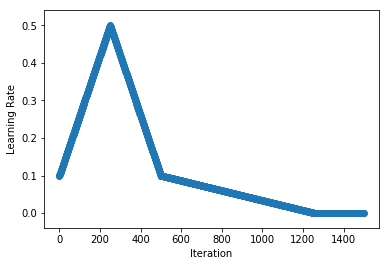 Originally proposed by Leslie N. Smith (2015), the idea of cyclically increasing and decreasing the learning rate has been shown to give faster convergence and more optimal solutions. We implement a wrapper class that loops existing cycle-based schedules such as TriangularSchedule and CosineAnnealingSchedule to provide infinitely repeating schedules. We pass the schedule class (rather than an instance) because one feature of the CyclicalSchedule is to vary the cycle_length over time as seen in Ilya Loshchilov, Frank Hutter (2016) using cycle_length_decay. Another feature is the ability to decay the cycle magnitude over time with cycle_magnitude_decay.

As an example, we implement the triangular cyclical schedule presented in “Cyclical Learning Rates for Training Neural Networks” by Leslie N. Smith (2015). We use slightly different terminology to the paper here because we use cycle_length that is twice the ‘stepsize’ used in the paper. We repeat cycles, each with a length of 500 iterations and lower and upper learning rate bounds of 0.5 and 2 respectively. 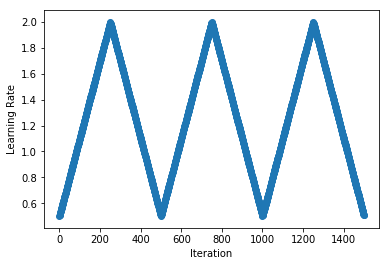 And lastly, we implement the scheduled used in “SGDR: Stochastic Gradient Descent with Warm Restarts” by Ilya Loshchilov, Frank Hutter (2016). We repeat cosine annealing schedules, but each time we halve the magnitude and double the cycle length. 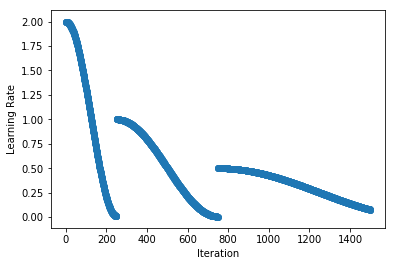 Want to learn more? Checkout the “Learning Rate Schedules” tutorial for a more basic overview of learning rates found in mx.lr_scheduler, and an example of how to use them while training your own models.